Originally released in 1992, Sensible Soccer is the answer to the video game debate: which is better, FIFA or Pro Evolution Soccer?

The brilliance of “Sensi” is in its simplicity. No soccer game before or since has this easily accessible control system. Short passes and long balls are mastered through the length of time you press the fire button and the direction you choose. Sensible Soccer’s “after touch” – the ability to swerve or bend the ball – was groundbreaking in its effortlessness. Weighted crosses, clever through passes, sliding tackles, and of course curving shots around the goalkeeper are all there to be learned and mastered.

Did I mention that all this requires one button only?

After years of multi-million dollar development and refinement, and finger-contorting button-mashing to pull off the most basic moves, the FIFA and PES series feel stiff and oppressive when compared to Sensi’s free-flowing football.

Sensi also has charm to spare – those little “Lego men” have a handful of simple animations, but there is no doubt as to the love and care that 16-bit British developer Sensible Software put into the design. Note the celebrations of the players after scoring! 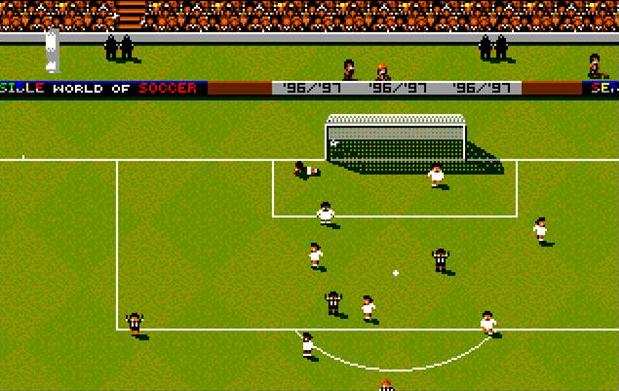 Drawing level with your opponent will cause your fans to goad: “You’re not singing anymore!”

And then came Sensible World of Soccer in 1994.

Sensible World of Soccer broadened and deepened the Sensi experience by adding new moves (including the ability to “bend” passes towards your teammates) and new tournaments. In fact, all tournaments, at all club and international levels. And SWOS includes a 20-season long career mode in which you manage your club, customize your formations, and buy and sell players in the transfer market.

Playing SWOS after years away is like bumping into an old friend from high school and wondering why you ever lost touch. The simple enjoyment of the fast-and-furious gameplay holds up, but it is in the fusion with the more considered strategy and tactical options that the game reveals its depth. Career mode has lessons to be learned, and playing through each campaign – defining my plan of attack, buying and selling players, winning and losing games – has got me thinking about the ways Sensi and soccer offers life lessons, such as:

And know the difference between strategy and tactics – they are not one and the same. All options are available in Sensible World of Soccer, and a season is not simply a string of 3-minute matches.

Strategy is the overarching approach. How will you use your resources over the course of the season? Will you plan on defensive play and aim to grind out 1-0 victories, or play more attacking soccer and score goals? And what about the transfer market – do you have the players you need? Will you buy, build up reserve players, or do both? SWOS is a game that requires a holistic approach.

This plays into tactics, which are the detailed, specific pieces you’ll need to achieve your overall strategy. In SWOS, every team formation (flat back four, 4-3-3, 5-3-2, and so on) is completely customizable, every position available for tweaking. Depending on your opposition, this may change from game to game, as will your choice in players and who best fits the roles that are needed.

Having a strategy is good. Having tactics: likewise. And having both will make all the difference. In many ways SWOS resembles an RPG, with the player-manager “leveling up” to progress. 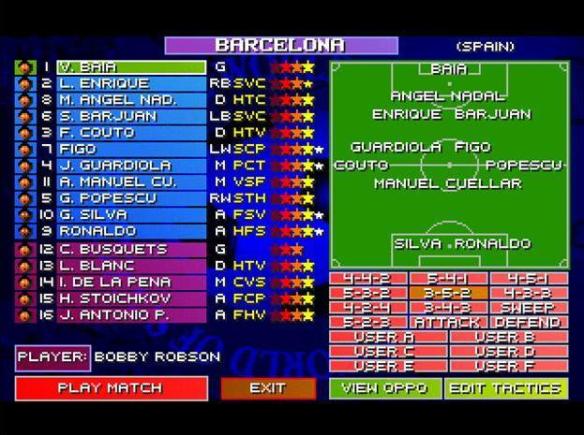 Check your tactics – and check-out the opposition – before every game.

Look for the Spaces

One of Sensible Soccer’s greatest strengths is the ability to play balls into open space. This is key to real life soccer, and to this game. Utilizing space, and passing balls to players on the run, pulls the opposing team open and gives you greater opportunity to attack. SWOS shows that even the most packed defense can be broken down. And if it’s not breaking down, then look at it differently. A new formation can be put into play by your manager on the sidelines, and tactics can be tweaked in-game.

It is always possible to thread your way through or around a problem. Finding the space to do so is critical.

Not highly original, but true anyway. There’s no point in hoarding cash (which slowly burns away in any case, through player wage bills and away games). Don’t be afraid to go into debt to buy the players you need – success in tournaments during the season will bring new funds and sponsorships to your team in the end.

Keep Calm and Stay in Control

The biggest temptation in Sensible World of Soccer is to play kick-and-rush, which does makes sense as the game is fast-paced and lends itself to long balls. In the middle of an intense match, the instinct is to immediately kick opposition attacks back into their half.

But SWOS shows you that there is more to the beautiful game. Winning the ball back is vital, but so is your next move – and often times a well-placed backwards pass to your own defense or goalkeeper will defuse the opposing attack, enabling you to move the ball around as your team regroups and counterattacks.

Take your time and maintain your composure. Don’t fight the challenge. Roll with it first, and then turn it against itself. 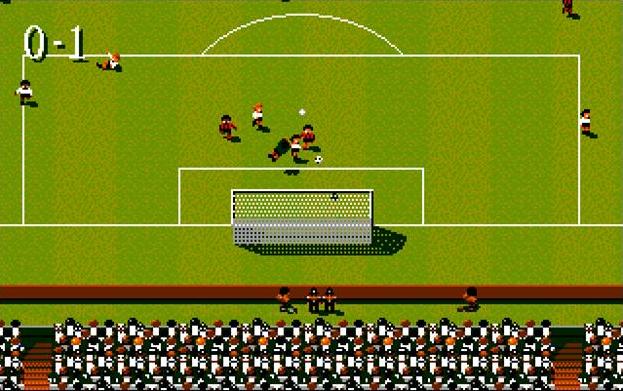 Bend it like Beckham – swerving the ball around the goalkeeper is possibly the most satisfying move in any video game.

A hard one to learn and not everyone knows defeat when they see it.

If you start out in the lower leagues and hope to build towards promotion, things will be difficult. Sooner or later you will encounter tougher teams. Finding yourself sitting in the relegation zone, getting whipped every game by stronger opponents is not easy.

The vital question is: where are my weaknesses? What areas do I need to work on to improve? This may be the defense or goalkeeper (if you’re leaking too many goals), or the strike force (if you aren’t scoring any yourself). The formation may simply not work for the team. Or the overarching strategy may need to change.

The thing is to change. Choose to change what’s not working. Experiment with different strategies and formations. There is no right or wrong answer, and only you can discover what works.

Sensible World of Soccer is one of the classics – the best soccer video game ever made, with a control system that has never been bettered, and a management mode that rewards strategic thinking. In 2007 it was named one of the 10 most important video games of all time by the History of Science and Technology Collections at Stanford University, alongside Tetris, SimCity, and Super Mario Bros. 3.

Sensible World of Soccer ‘96/’97 – the last (and possibly definitive) version of Sensi, before a poor 3D sequel in 1998 and a disastrous 2006 reboot – was revamped and rereleased on Xbox Live Arcade, and the original version is also available on Good Old Games (www.GOG.com) for $5.99. Sensible World of Soccer is a must for any retro gamer or soccer fan.

One response to “Life Lessons from Sensible World of Soccer”